The Egyptian website Nowhere Online Music Platform, known simply as the Platform, has announced a call for all Egyptian musicians to apply for its new season of online concerts.

While offering their support for the creation of high-quality professional video and audio material, Platform will focus on online concerts for young aspiring groups who do not have the opportunity to present their work to the public.

Selected candidates will be offered a live music video session and professionally filmed material that will help them better market their work.

At the same time, Platform will support musicians in marketing their audio material through numerous digital platforms, such as Spotify, Anghami and Deezer, guaranteeing financial returns.

Young artists will also be offered workshops and counseling sessions with renowned local and international musicians, who teach music production as well as marketing techniques.

While welcoming new, original and daring musical ideas, and without setting an age limit, Platform has defined some guidelines for musicians wishing to apply them.

– The planned concert should not exceed 30 minutes.
– Original music / songs (covers are not accepted)
– The group must not exceed five members
– The presence of an artistic manager in charge of the group, who is not one of the performing musicians.
– Group photos 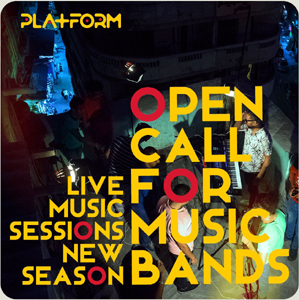 Founded in 2014 by Emad Mabrouk, the online music platform Nowhere aims to create a focal point for all budding young musical talent. Among their reservoir, we find groups like Almena, Hawas, Hageen, among other groups that have emerged in recent years.

Online concerts are among the many activities organized by Platform featuring several musicians, such as Adham El-Habashy, Mizology, Ahmed Hamady and Huda Asfour.

Platform cooperated with Massar Egbari during their live concert, which took place on March 24, 2020. It was the first such performance by an Egyptian group, held just after the general lockdown was put in place.

Originally a filmmaker and film researcher, Mabrouk’s portfolio includes work at the Jesuit Cultural Center in Alexandria and the film department of the Bibliotheca Alexandrina. He is now focusing on new Platform projects and music.